A bird’s nest inside your chimney can lead to a build-up of potentially combustible materials in your flue, and will need to be removed by a professional chimney sweep. Jackdaws and starlings are the most common chimney dwellers, with some birds often returning to the same place to nest the following year.

If you have suspicions that birds are nesting in your chimney, or you can see nesting materials in the fireplace, do not attempt to clear it from the chimney by lighting a fire. This can cause your house to fill with smoke, or even start a chimney fire.

Hiring a competent chimney sweep, with the correct tools and expertise, is the only safe way to clear a nest and any other blockages from your chimney. The blockage will be removed safely and efficiently, and your chimney will be checked over to confirm that it is safe to use.

Timing is also important when you are looking to remove a bird’s nest from your chimney. Nesting season runs from March to August, during which time it is classed as an offence under the Wildlife and Countryside Act 1981 to destroy or remove a nest while it is in use. 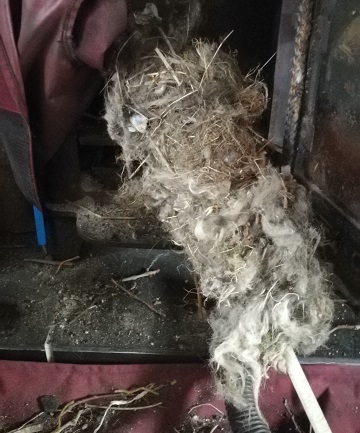